Skip to content
We just completely updated our website. Let us know if you are encountering any issues.
Close
I visited | 0 | 0
SAVEDSince 1963 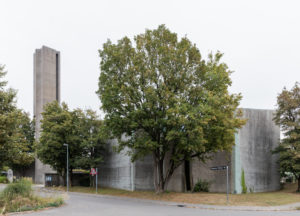 The complex is a great example for the symbolic power of Brutalism. Opening up only toward the courtyard, the church’s monolithic façade appears like a mountain range from the outside. The clustered roof structure gets lower towards the courtyard and leads to a partly greened, rock-like arcade which connects the church with the adjacent parish center. The vivid, overgrown, rough board formed concrete surfaces blur the line between landscape and architecture, thus elevating the modernist principle of interwoven ex- and interiors to an new level. The character of a protective cave is further heightened on the inside with an elaborate convex ceiling shell designed by Frei Otto and Fritz Leonhardt. This ceiling is suspended from only three points and allows for wide light shafts that direct sunlight from windows hidden above the ceiling towards white, reflective walls which allows for an indirectly lit and surprisingly bright interior. Written by Sandra Pappe