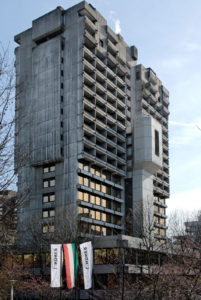 The high-rise was the first building of the international hotel chain, which is led by the architect. Originally the building was planned for mixed use with office spaces and apartments. Later these plans were changed to turn the project into a hotel. After the American client backed out shortly before the construction was completed, Otto Lindner took over the hotel himself. With its offset balconies and its varied, jagged façade, the building is elevated into an artistic sculpture that goes beyond mere functionalism. Written by Sandra Pappe