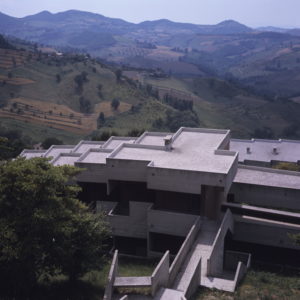 The early “collegio del colle” is formed by a central nucleus with collective services, surronded by several groups of small residential cells, lying on a hill near the city of Urbino. Concrete and brick constructive elements are in harmonic contrast with the landscape. The following three groups of “collegi” (vela, aquilone, tridente), were added between 1973 and 1983, creating a organic ensemble. Written by Francesco Di Bella