Russia’s mysterious ‘City of the Dead’ 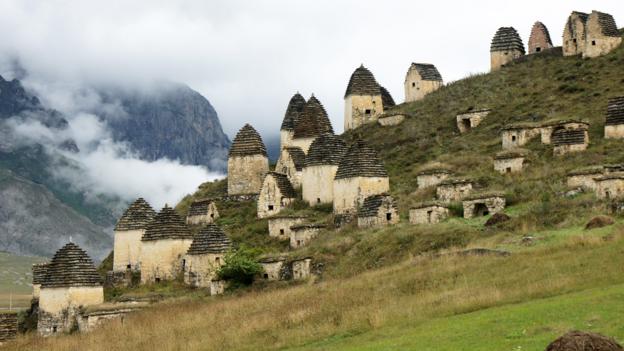 Just outside the remote Russian village of Dargavs lies a medieval necropolis fittingly called the “City of the Dead”. This ancient burial ground holds the remains of more than 10,000 people – many of whom lie eternally with their clothes and belongings – and some locals believe that anyone who dares to enter won’t return alive. While much mystery surrounds this graveyard located just over the border from Georgia (even the date of its construction is still just an estimate) historians are gradually unravelling its full story.

Since the 16th Century, this remote stretch of southern Russian farmland has been used as a burial ground; its origins, though, are still unclear. One theory is that when territory was scarce during the 13th-Century Mongol-Tatar invasion, locals living in this 17km valley of the Caucasus mountains began to create similarly structured above-ground crypts to conserve space. Another theory suggests that the City of the Dead was created following the Indo-Iranian tradition established by the migrating Sarmatians who settled in southern Russia and buried their dead above ground to respect the land.

Today, the site comprises 99 remarkably conserved medieval curved-roof crypts with single windows, and contains more than 100 bodies. Some are so well preserved that flesh is still attached to their bones.