Sulaiman-Too Sacred Mountain Kyrgyzstan dominates the Fergana Valley and forms the backdrop to the city of Osh, at the crossroads of important routes on the Central Asian Silk Roads. For more than one and a half millennia, Sulaiman was a beacon for travellers revered as a sacred mountain. Its five peaks and slopes contain numerous ancient places of worship and caves with petroglyphs as well as two largely reconstructed 16th century mosques. One hundred and one sites with petroglyphs representing humans and animals as well as geometrical forms have been indexed in the property so far. The site numbers 17 places of worship, which are still in use, and many that are not. Dispersed around the mountain peaks they are connected by footpaths. The cult sites are believed to provide cures for barrenness, headaches, and back pain and give the blessing of longevity. Veneration for the mountain blends pre-Islamic and Islamic beliefs. The site is believed to represent the most complete example of a sacred mountain anywhere in Central Asia, worshipped over several millennia. 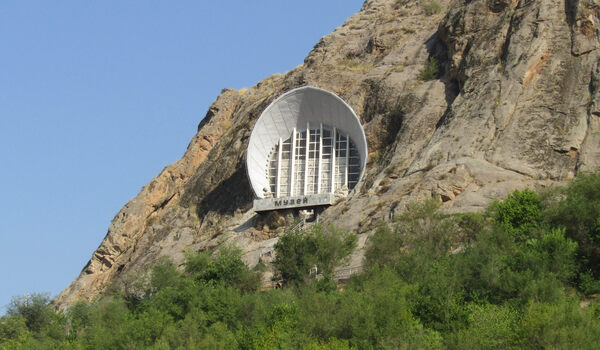 Discover Muzey Sulayman Too in Osh, Kyrgyzstan: An outstanding piece of retro Sci-Fi architecture built into a sacred mountain.

en ru
We have nothing nearby.