The site consists of four large groups of stone circles that represent an extraordinary concentration of over 1,000 monuments in a band 100 km wide along some 350 km of the River Gambia. The four groups, Sine Ngayène, Wanar, Wassu and Kerbatch, cover 93 stone circles and numerous tumuli, burial mounds, some of which have been excavated to reveal material that suggest dates between 3rd century BC and 16th century AD. Together the stone circles of laterite pillars and their associated burial mounds present a vast sacred landscape created over more than 1,500 years. It reflects a prosperous, highly organized and lasting society.

Fishing and shellfish gathering have sustained human life in the 5,000 km2 property, which is formed by the arms of three rivers. The site comprises brackish channels encompassing over 200 islands and islets, mangrove forest, an Atlantic marine environm…

James Island and Related Sites present a testimony to the main periods and facets of the encounter between Africa and Europe along the River Gambia, a continuum stretching from pre-colonial and pre-slavery times to independence. The site is particularly… 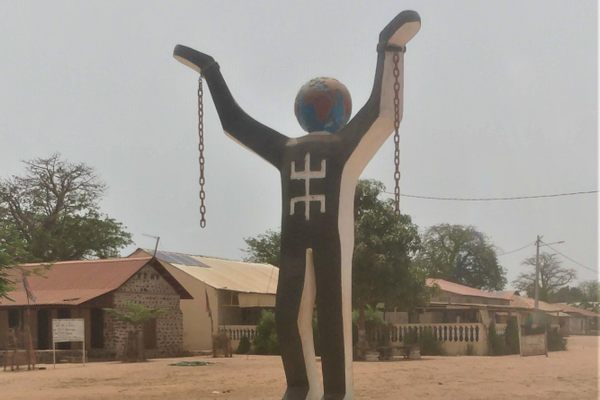 Discover Never Again Statue in Albadarr, The Gambia: A unique, eye-catching statue that carries an important message of hope.