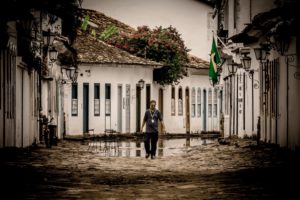 Located between the Serra da Bocaina mountain range and the Atlantic Ocean, this cultural landscape includes the historic centre of Paraty, one of Brazil’s best-preserved coastal towns, as well as four protected natural areas of the Brazilian Atlantic Forest, one of the world’s five key biodiversity hotspots. Paraty is home to an impressive diversity of species, some of which are threatened, such as the jaguar (Panthera onca), the white-lipped peccary (Tayassu pecari) and several primate species, including the woolly spider monkey (Brachyteles arachnoides), which are emblematic of the site. In the late 17thcentury, Paraty was the end-point of the Caminho do Ouro (Gold Route), along which gold was shipped to Europe. Its port also served as an entry point for tools and African slaves, sent to work in the mines. A defence system was built to protect the wealth of the port and the town.  The historic centre of Paraty has retained its 18th century plan and much of its colonial architecture dating from the 18th and early 19th centuries.