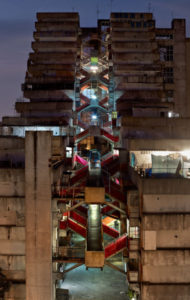 With originally seven stepped blocks, the “Sails of Scampia” were one of the largest social housing projects in Italy. Given that most of the service facilities, such as stores and kindergartens were never realized, the complex swiftly fell into disrepair and became a social flashpoint. The complex has formed the backdrop for several mafia movies and documentaries.