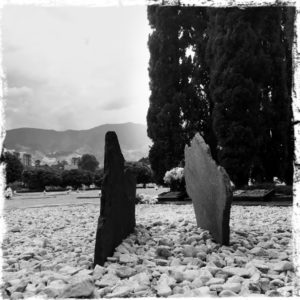 The notorious drug lord Pablo Escobar died in a shootout with the Colombian National Police on December 2, 1993. He was buried in the peaceful Cemetario Jardines Montesacro in Itagüí, just south of Medellín, where Escobar grew up.

Escobar’s headstone sits in a family gravesite within the cemetery, alongside those of his parents and other relatives. Sometimes adorned with freshly laid flowers, and occasionally attracting a family member, a friend or a curious tourist, the grave is a strangely serene resting place for a man whose actions caused so much terror and death, and whose cartel once supplied about 80 percent of the cocaine smuggled into the United States.