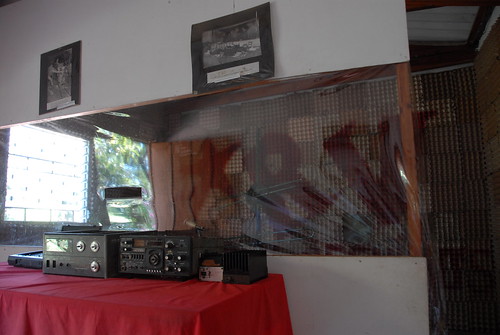 From 1980 until 1992, El Salvador’s military government battled the left-wing Farabundo Martí National Liberation Front in a bloody civil war ignited by disparities between the social classes—particularly farmers versus the nation’s wealthy landowners. This landmark 12-year period was characterized by civilian massacres and a draft that recruited child soldiers, with the final death toll estimated at 75,000, not accounting for the 8,000-plus citizens who vanished without a trace.

Museo de la Revolución Salvadoreña, also known as the Museum of the Revolution, commemorates the events, heroes, and victims of the Civil War from Perquín, a Salvadoran municipality in the country’s northeastern hills. The one-story museum houses a collection of wartime artifacts and memorabilia, from the gunned-down helicopter that killed Domingo Monterossa—the colonel responsible for the infamous El Mozote Massacre of 1981, in which over 800 civilians were murdered—to the studio of Radio Venceremos, the leftist radio network that broadcast its mission throughout El Salvador’s rural regions.