Gaborone is the capital and largest city of Botswana with a population of 231,626 based on the 2011 census, about 10% of the total population of Botswana. Its agglomeration is home to 421,907 inhabitants at the 2011 census.
Gaborone City is situated between Kgale Hill and Oodi Hill, near the confluence of the Notwane River and Segoditshane River in the south-eastern corner of Botswana, 15 kilometres from the South African border. The city is served by the Sir Seretse Khama International Airport. It is an administrative district in its own right, but is the capital of the surrounding South-East District. Locals often refer to the city as GC or Motse-Mshate.The city of Gaborone is named after Chief Gaborone of the Tlokwa tribe, who once controlled land nearby. Because it had no tribal affiliation and was close to fresh water, the city was planned to be the capital in the mid-1960s when the Bechuanaland Protectorate became an independent nation. The centre of the city is a long strip of commercial businesses, called “Main Mall” with a semicircle-shaped area of government offices to its east. Gaborone was once one of the fastest-growing cities in the world, and this has created problems with housing and illegal settlements. The city has also dealt with conflicts spilling into the country from Zimbabwe and South Africa during the 1980s. 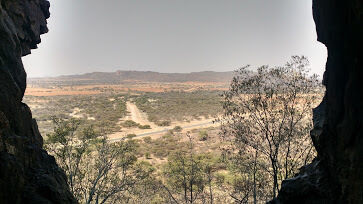 Discover Kebokwe's Cave in Molepolole, Botswana: The historic cave is both a symbol of superstition and black magic and inspired one of the early Christian converts in Botswana.