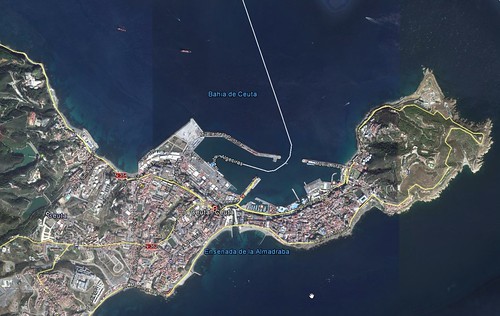 Ceuta (UK: , US: , Spanish: [ˈθewta]; Berber languages: Sebta; Arabic: سَبْتَة‎, romanized: Sabtah) is a Spanish autonomous city on the north coast of Africa.
Bordered by Morocco, it lies along the boundary between the Mediterranean Sea and the Atlantic Ocean. It is one of nine populated Spanish territories in Africa and, along with Melilla, one of two populated Spanish territories on mainland Africa. It was part of the province of Cádiz until 14 March 1995. On that date, Statutes of Autonomy were passed for both Ceuta and Melilla.
Ceuta, like Melilla and the Canary Islands, was classified as a free port before Spain joined the European Union. Its population consists of Christians, Muslims, and small minorities of Sephardic Jews and ethnic Sindhis from modern-day Pakistan.
Spanish is the only official language. Darija Arabic is also spoken by 15–20% of the population.