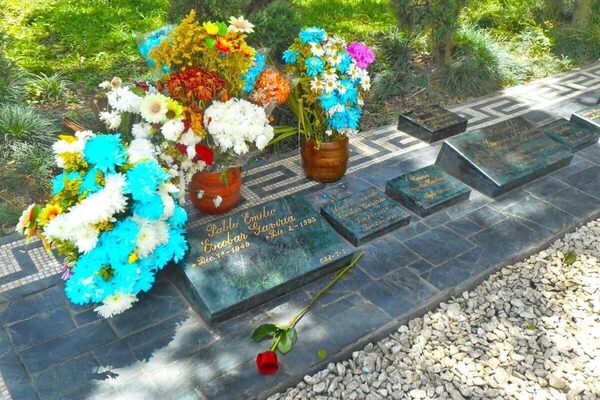 The notorious drug lord Pablo Escobar died in a shootout with the Colombian National Police on December 2, 1993. He was buried in the peaceful Cemetario Jardines Montesacro in Itagüí, just south of Medellín, where Escobar grew up.

Escobar’s headstone sits in a family gravesite within the cemetery, alongside those of his parents and other relatives. Sometimes adorned with freshly laid flowers, and occasionally attracting a family member, a friend or a curious tourist, the grave is a strangely serene resting place for a man whose actions caused so much terror and death, and whose cartel once supplied about 80 percent of the cocaine smuggled into the United States.

But the normally tranquil gravesite has not been free from its own controversies. In 2017, American rap artist Wiz Khalifa was performing in Medellín, and took the time to visit the grave. He posed for photos at the grave, apparently smoking marijuana, and posted them to his Instagram account. These were widely interpreted as Khalifa paying tribute to Escobar, and an outcry inevitably ensued. According to CNN at the time, Medellín’s mayor, Federico Gutierrez, told local media, “That scoundrel, instead of bringing flowers to Pablo Escobar, he should have brought flowers to the victims of violence in this city.”

A year later, in 2018, reports began to surface of a new “cocaine pilgrimage” trend, possibly inspired by the hit Netflix show Narcos. Tourists began posting photos and videos of themselves snorting lines of cocaine off Escobar’s headstone, often accompanied by less than insightful comments. Needless to say, local authorities are very much against such behavior.

You can get to Cemetario Jardines Montesacro by taking the Medellín Metro Line A south to Sabaneta Station in Itagüí. From there it's about a 10-minute walk to the cemetery, crossing the Autopista Sur road (Carrera 42). Just inside the entrance to the cemetery is a path that leads up some stairs to the church on the hill. Escobar’s grave is located just on the other side of the church.