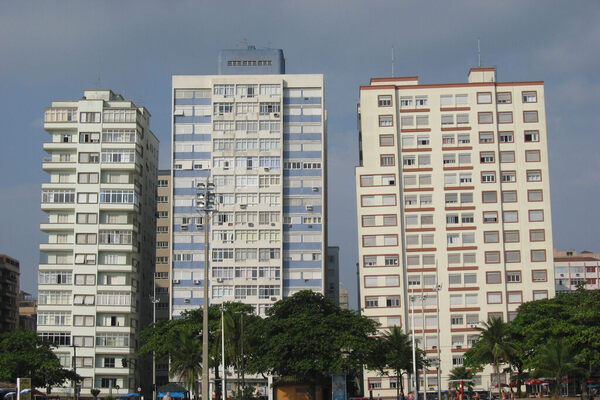 Discover Leaning Towers of Santos in Santos, Brazil: Something about this Brazilian city is slightly askew... literally.

Looking at a picture of Santos, Brazil’s waterfront skyline something seems just a bit off. It is not always immediately apparent, but with more than a cursory look one will notice that a large portion of the buildings seem to be leaning frighteningly to one side.

While the angle of the high-rise condos are not as drastic as Pisa’s famous tower, the tall buildings seem almost more precarious given the cognitive dissonance of seeing a modern building standing askew. Around 90 of the city’s tall skyscrapers lean in such a fashion standing anywhere from a few inches to a few feet off kilter. The issue arose after the buildings had been constructed. Due to lax buildings codes, the foundations of many of Santos’ buildings were only built a few meters deep, atop a layer of comparatively soft clay that was not able to handle the immense weight of the buildings, compacting in spots to create the leaning effect. Wisely, the building codes were quickly revised, but the damage had already been done.

They're easily found around the beachfront of the city.