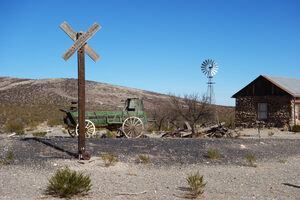 This small New Mexico town has gone by many names. Old timers called it Mexican Springs, back when it served as a relay station on the Army Mail line. For a few years after the Civil War it was called Grant. In 1870 when some prospectors discovered a rich silver ore nearby, they renamed it Ralston City after William Ralston, who financed their mining operation. The promising camp was home to some 3,000 people, but once the silver disappeared, the population dwindled.

It was almost a ghost town in 1879 when Colonel William G. Boyle bought up most of the land and goods claims. In an attempt to give the town a fresh start, he gave it a new name: Shakespeare. Mining operations picked up again, and for a little while, the small town grew lively.

In its heyday, Shakespeare was a theater of old western tales filled with colorful characters. Rumor has it that the skinny kid who washed dishes at the hotel in the mid-1870s was none other than Billy the Kid. In 1881, notorious cattle raiders “Russian Bill” Tattenbaum and Sandy King were captured and hanged in Shakespeare. Records state that the men were executed because “Russian Bill stole a horse and Sandy King was just a damn nuisance.”